Nathan Salsburg was born in Wilkes-Barre, Pennsylvania; raised up in Louisville, Kentucky. Curator of the Alan Lomax Archive / Association for Cultural Equity, in the service of the late folklorist/musical anthropologist’s life’s work. Also musicianeering, as the old-timers say. See “Nathan Salsburg guitar music,” above. Other involvements include album productions of and writing on topics concerning vernacular musics under various cover.

RHOD was begun in 2005 as an opportunity to cover folkish-musical subjects as time and inclination allow, and to provide assistance to the adventurous in travels throughout the Internet’s clearing-houses of traditional, local, site-specific musics. See “The World’s Mp3s,” which has in the intervening years—with plenty thanks to YouTube—become less of a priority. 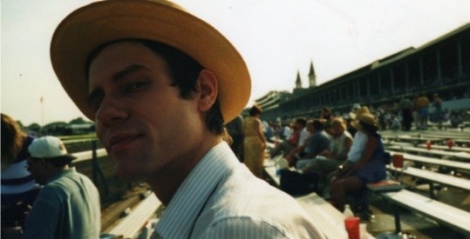 Caption: At Churchill Downs for the Kentucky Oaks, moons ago, before those awful apartment-block towers went up and dwarfed the twin spires. The straw-and-silk hat was a gift to my father from an old man who never learned to drive named Jesse Hyman. Jesse’s apartment was flooded during Wilkes-Barre’s legendary Flood of 1972, and my father helped him for many hours cleaning, moving, damage controlling. Jesse, who reportedly was hardly in financial straits, gave my father his hat as a thank-you. My grandfather was furious, and slammed his fist on the table, shouting “How dare he give you his hat! Don’t let him give you his hat! You give it back!”